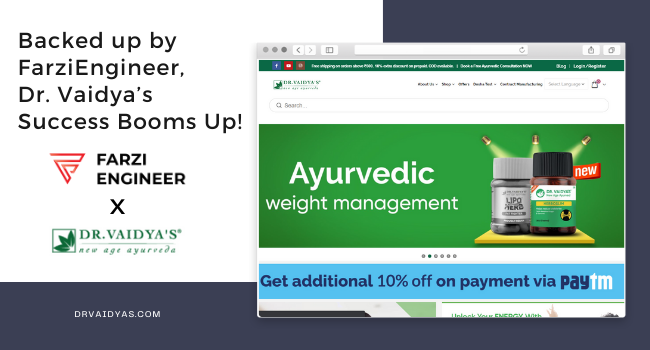 Dr. Vaidya: A sneak peek into the past

Just coming across the name of Dr. Vaidya introduces us to their almost one hundred and fifty years old legacy in the arena of Indian Herbal Medicine. It goes without a doubt that their resilient contribution to the field is unparalleled to date. The dedicated research undertaken by them on the Ayurvedic health products is exceptionally commendable and has created a unique history of its own. Dating to as old as the year 1850, the origin of the Vaidya family’s tryst with Ayurveda was led by Hakimchand Vaid who was then a traveling Vaid around Ahmedabad. They said that the best thing about a legacy is that it passes on just like a brook emerging from the hills.

Similarly, over time, advancements kept occurring with fresh minds coming up and it was ultimately in the year 2016, that Dr. Vaidya’s: The New Age Ayurveda was established by Arjun Vaidya. With the further enhancements in the technology, Dr. Vaidya’s flourished and successfully made a place for themselves in the Ayurveda e-commerce ecosystem by the year 2020. This made them the first successful and the largest Direct-to-Consumer (D2C) brand in the Ayurveda Industry.

It was around the year 2018 that Dr. Vaidya’s was acquired by RP Sanjiv Goenka Group and as a result, it became India’s first successful D2C exit. By this time, they had efficiently created a name and space for themselves in the eCommerce world and were able to handle around 4k orders per day. It was around the same time that they witnessed huge sales and consumption of their products.

With the advancements in the eCommerce industry and day-by-day elevating demands, Dr. Vaidya’s seeked support from FarziEngineer wherein the latter agreed to help them out with the technicalities. First of all, the task of Conversion Rate Optimization (CRO) was undertaken and further exceptionally executed by the highly functioning team of FarziEngineer. Their second focus was on managing the server in the times when the demand was high for example, at the times when the sale was going on. In furtherance to this, the prime objective was to tackle the situations as in when the website used to get slow due to heavy traffic.

In order to improve on the Customer Rate Optimization, the team of FarziEngineer began with reading the customer’s behavior while they were exploring the website. Based on this, the customer funnel was created. To be exact, this tells us the route that a customer is expected to follow in terms of web pages while on the website. This involves the path like search button, add to cart, checkout page, and then submission of the reviews. This enables us to comprehend customer behavior. There might be some instances where the drop is 60-70% at the ‘Add to cart’ page which means that a user might just add the items to the cart and then close their session.

After the creation of the funnel, the next step was to understand the possible reasons due to which the drop might be taking place. Further, methods to resolve the drop were discovered and the most suitable and optimal one was implemented.

The engagement under the FarziEngineer`s microscope

Just like studying customer behavior, one of the crucial pieces of work is to identify the areas which show significant customer engagement. This is done in order to maintain or in some cases improve the quality of such promising areas that foster engagement.

AB testing was another chore at hand. A lot of offers were considered and it was researched which one of them proved to be the most engaging for the customers. After this, either a single offer is considered or an amalgamation of more than one offers is executed with the aim to boost the conversion rate. The team of FarziEngineer was without a doubt, able to boost the conversion rate for the website of Dr. Vaidya’s by almost 10-15%.

Talking about their experience working with Dr. Vaidya’s in a nutshell, the team of FarziEngineer acknowledges that they found the co-founders Arjun Vaidya and Trisha Rajani Vaidya to be very data-driven, highly supportive, and ready to put their brains and hearts into the work. The team also admired their dedication and has no doubt regarding them as the best D2C co-founders that they have ever come across. Having been backed up by almost 150 years of expertise, the two co-founders promise to make the ‘New Age Ayurveda’ accessible to the consumer base.